Introduction. In The Origin of Species Darwin stated: "If it could be demonstrated that any complex organ existedwhich could not possibly have been formed by numerous, successive, slight modifications, my theory would absolutely break down".

Professor Michael Behe of Lehigh University, Pennsylvania, recently wrote a book called Darwin's Black box in which he demonstrates that complex biological systems could not be formed by numerous modifications and such systems are termed "irreducibly complex".

At the end of Michael Denton's book Evolution: A Theory in Crisis he says ".....everywhere we look, to whatever depth we look, we find an elegance and ingenuity of absolutely  transcending quality, which so mitigates against chance".

"[The instructions within the DNA of a single cell] if written out would fill a thousand 600 page books. Each cell is a world brimming with as many as two hundred trillion tiny groups of atoms called molecules. Our 46 [human] chromosome 'threads' linked together would measure more than six feet. Yet the [cell] nucleus that contains them is less than four ten-thousandths of an inch in diameter." Rick Gore, "The Awesome Worlds within a Cell" in National Geographic, September 1976, pp. 357-358, 360.

What is irreducible complexity? Have you ever had the experience of trying to build one of those pieces of furniture or other household item that come as a package of components you have to assemble (usually with very sketchy instructions) and you find one of the components missing?  Quite often this means the item cannot function.  If this has happened to you, you have experienced “irreducible complexity,” i.e. the fact that a complex item made of many parts will not function until all the component parts are present and working together.

Biological systems, from individual cells to whole ecosystems, abound with irreducible complexity. Below are some examples. 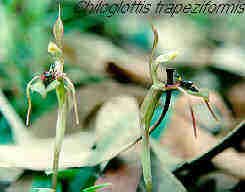 Plant and animal interactions. Some orchids are pollinated by male insects that try to mate with the flowers. This bizarre behaviour occurs because the flowers produce chemicals that are the same as chemicals emitted by female insects.  Usually a mixture of common chemicals is involved.  An Australian orchid named Chiloglottis trapeziformis is only pollinated by a wasp named Neozeleboria cryptoides.  Scientist who studied the wasp and orchid were surprised to find that the chemical signal involved was “one unique compound, requiring a rigid biosynthetic process and a highly specific receptor a system with seemingly limited evolutionary flexibility.”  (Science, vol. 302, p437, 17 Oct 2003.)

“Limited evolutionary flexibility” means that if either the orchid or the wasp got any of the steps wrong in making this compound, emitting it at the right time and making the receptors that detect the chemical in the air, then the

orchid would die out for lack of pollinators.  The highly specific relationship between some plants and their pollinators is the classic evolutionary problem – both orchid and wasp had to evolve their part of the system at the same time or it wouldn’t work at all.

The wasp orchid relationship depends on chemical signalling. The orchid makes a chemical with a very precise shape, and the male moth has a receptor for it – a much larger molecule containing a part that is the complementary shape to the signal chemical.  The receptor and signal molecules fit together like a lock and key.  When the signal molecule fits into the receptor, the receptor changes shape and that starts off a whole series of reactions that change the wasp’s behaviour.

Cells and receptors. Although the results are usually far more mundane than sex crazed wasps (see above), chemical signalling is essential for all biological processes.  Living cells have numerous receptor molecules on their surfaces which are turned on and off by chemical signals sent out by other cells, or in the case of the wasp, another living organism.  Quite often the interaction between one chemical signal and receptor is merely one step in a multi-step process that involves other types of physical and chemical reactions.

An effective signalling mechanism needs the signal, the receptor and the response mechanism to all to be present and functioning at the same time before it is functional.  If any of these are missing the system is useless.

This is a powerful chemical signal that stimulates the heart, blood vessels, hypothalamus, pituitary gland and adrenal gland to each ply their part in raising the blood pressure and retaining water and sodium.  Neither the rennin, angiotensinogen or the ACE are of any use on their own but the system will not work if one of them is missing.

As well as being an example of chemical signalling, the rennin-angiotensin system is an example of another type of irreducible complexity: a cascade system.  A cascade system is multi-step system that enables a small change to result in a large response, because each step in the cascade amplifies the signal or stimulates other body systems.

Blood clotting is part of a whole system of body defence mechanisms that not only prevent blood loss, but repair the damage that caused the bleeding and deal with any foreign invaders that may enter the body via the damaged tissue.  Therefore some of the steps in the clotting cascade send out signals to the inflammatory pathway (which cleans up damaged tissue and starts the repair process) and the complement system (one of the body’s means of killing invading microbes).

Wired for much more than sound.(Below taken from a comment to the Guestbook by Paul Taylor (26.1.05). The human body reveals many highly complex systems that are interrelated in highly complex ways, at the molecular level, defying any attempt to ‘explain’ them within the framework of “numerous, successive, slight modifications.” The signature of our Creator is indelibly inscribed upon us by the supreme intelligence evinced in this design, with everything finely tuned and interrelated at the molecular level and engineered to allow all the activities necessary for normal living.

The series, ‘Wired for much more than sound’ by Dr G. [Howard Glicksman, M.D.] discusses the body’s many sensory organs and how they interrelate at the molecular level with the central nervous system, including the brain, in many complex ways essential to the ‘adaptation and survival’ of our species. Any naturalistic explanation must show how these systems arose independently and how their complex interrelationships and control systems subsequently arose, by the Darwinian mechanisms of mutation and natural selection or through other alternative mechanisms, in small incremental steps.

Looking at what we already know of these interrelationships and keeping in mind that we are still largely ignorant about many of these processes indicating that their known complexity is only going to increase, the simple explanation of design, which is the process by which all the parameters are pre-selected by a knowledgeable designer and by which the entire system is assembled at the same time according to a pre-existing design, is by far the simplest, the most probable and the most credible explanation that exists. It is also in agreement with what we know at the embryological level – that life comes from life and all life derives from information-rich data that is passed on from generation to generation. Each new individual is constructed with all systems being simultaneously built from an existing plan in the DNA. The process of reproduction is also an highly complex system that resists any explanation by “small incremental steps” but evinces design by an intelligence that vastly surpasses our own.

In the words of the author:-

“It was easy to believe in macroevolution when I was growing up. But then I came face to face with the knowledge of how the body actually works. Neo-Darwinism and macroevolution vs. the truth of Medical Science: it didn’t add up then and it doesn’t add up now. See what you think!!” Howard Glicksman, M.D.

I encourage anyone who wishes to make a fair comparison of which model fits the data best to visit the site Wired for much more than sound for some very interesting and informative reading. Paul Taylor, 2005.

Summary.Chemical signalling and cascade systems are found in all biological systems from biochemical pathways within cells to interactions between whole organisms.  They are essential to life and any theories of how living things arose and propagated must be able to explain how such systems came into being.

This page was mainly written by Diane Eager.

Books - The book below focuses specifically on the contents of this page and can be bought on line at the "Was Darwin right store".

Half a Mousetrap Doesn't Work

Wired for much more than sound

Below from Answers in Genesis web site.

What is ‘irreducible complexity’ in living organisms, and how does it offer supportive evidence for a created world?

Unlocking The mystery Of Life