Is there any evidence from history or in the fossil records for a worldwide flood and does such a flood fit in with some geological features we see?

The aim of this page is to give a very brief introduction to this topic and not delve into it in any depth, as there are already good books, web articles and web broadcasts and videos about this topic. There are links to some of these at the bottom of this page.

Most of the web articles are from the Answers in Genesis web site. To top

With respect to how literally Genesis, the flood and the six days of Creation should be taken, some Christians feel that the literal Young Earth position with a literal global flood is in such conflict with science that it is totally untenable and indeed, to attempt to get people to accept a Young Earth view is counter productive to people accepting the Christian Faith.

Arguments in favour of an Old Earth that apparently fit in with the Genesis account can be seen at the web site Answers in Creation and this site tends to be very critical of Young Earth arguments, claiming that all can be falsified.

This site accepts that Christians have differing viewpoints, and the reader must decide. Some arguments against Old Earth Creation science and theology are given in the links as the bottom of the viewpoints page.

The story of a worldwide flood is not only told in the Bible (Genesis) but is also told by people groups such as Aborigines and American Indians (The evidence for Noah's flood -DVD).

The tablet on the right of the Babylonian ‘Epic of Gilgamesh’ was found in ancient Nineveh. It tells the story of a great flood similar to the one recorded in Genesis, but with obvious corruptions of the original true account.

Since Noah’s Ark landed in the mountains of Ararat (the mountains rose at the close of the Flood), it is not surprising that Noah’s progeny migrated down the new Tigris River valley from the mountains to found the earliest post-Flood civilizations such as Sumer, Akkad, Uruk, and Nimrud (which later became Babylon), Haran, Jericho, and Sidon (Phoenicia), and more distantly, Egypt and the Indus Valley of N.W. India. (The Tigris and the Euphrates rivers were named after two of the four pre-Flood rivers mentioned in the Bible that flowed from the Garden of Eden.) 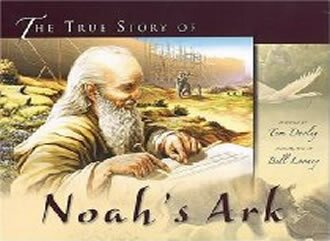 Ancient Babylonian legend speaks of a pre-Flood series of ten kings, the ancient Hindus (N.W India) spoke about aseries of Ten Pitris who ruled before the global Flood, and the ancient Egyptians described Ten Shining Ones who ruled consecutively before the Deluge. Like the Bible also says, these pre-Flood patriarchs lived much longer than we do, and this was confirmed by the ancient historians Berosus, Nicolaus of Damascus, Hesiod, Plato, Hecataeus, Mochus, Hieronymus, and Manetho.

The last of these kings in the aforementioned lists was the hero who led seven others aboard a vessel in which they survived the global Flood. In ancient Babylon , the hero’s name was Zisudra who spear-headed the survival on the Ark of seven other humans, the Seven Apkallu. In ancient Egypt , the Flood hero was Toth who survived the Deluge along with the Seven Sages. In ancient N.W. India, the hero was Manu who survived the global-Flood "pralaya" with the Seven Rishis. The odds are astronomically long that these supposedly distinct civilizations would have the same legend of a global Flood with eight people surviving from the pre-Flood population that was led by a series of ten kings if it were not real history that happens to corroborate the Genesis account.

And the odds become even longer that Noah’s Flood is not an historical fact when one considers the hundreds of tribes from around the world that have ancestral knowledge of the global Flood. And yet, we are expected to ignore this overwhelming evidence because it contradicts current mainstream science and archaeology. Also expected of us to ignore are the many ancient legends from various people-groups that corroborate the Biblical account of the confusion of language at the Tower of Babel where Nimrod (also known as Menrot, Marduk, Merodach, Ninus, Sargon, Shun, Bacchus, and Zarathustra) led an act of defiance against God about 150 years after the Flood which devastated the earth around 2400 B.C.

There are many other ancient historical factors, as well as a plethora of geophysical, biological and anthropological indications that support the Genesis rendering of ancient history which can be gleaned from a variety of resources, such as my book Old Earth? Why Not! The accuracy of Genesis is further attested to therein by an analysis of the ancient Biblical names that were thought to be mythological until modern archaeology confirmed their historicity, names such as Haran, Ur, Nahor, Serug, and the Hittites.

Thanks to modern archaeology, these Biblical Hittites were confirmed to be non-mythological, and were discovered to have also had a legend about the global Flood, the same Deluge recounted in a legend from the Tamils of southern India which was survived by again eight people, Satyavrata (Noah), Sharma (Shem), Charma (Ham), Japati (Japheth), and their wives. The Tamils apparently migrated from the Indus River valley to the south around 1500 B.C. when the Ice Age ice-pack melted because of climatic changes at that time which caused the sea-level to rise about 300 feet, with both inducing migrations of people-groups (such as the Aryans from the north, who moved into the Indus Valley and displaced the Tamil people who already were losing ground to the encroaching ocean at that time)

What of geological evidence for a flood?

All over the world there are fossilised bone of animals, sometimes grouped together in what appears to be massive graveyards (Baker, 1996). These fossil graveyards show evidence for large number of animals being buried quickly. Such fossil records in sedimentary rock  include fossilised remains of fish. Under normal circumstances, fish would rot rather than be fossilised. Again, this points to some sudden calamity that buried vast numbers of animals quickly.

The following test in purple is a quote from another web-site.

The lethal wound to uniformitarian geology is to be found within the great fossil graveyards that exist in every major country, especially the Americas. In these fossil graveyards vast numbers of creatures are violently mixed together. There are dinosaur graveyards in America and China with hundreds of dinosaurs mixed and buried together.

How did they get there in such vast quantities?

Many fossil graveyards are high up in mountainous areas. In Sicily, for example, four thousand feet above sea level on Mount Etna, there are two graves crammed with the bones of thousands of hippopotamus in each cave. On the island of Malta there are lions, tigers, mammoths, birds, beavers, hippopotamus and foxes all mixed together.

A cave in Malta contains so many fossils that Malta's present size would not keep this awesome quantity alive for just one week. In America, a death pit exists near Hollywood, with eagles, doves and approximately two hundred and fifty sabre tooth tigers and fifty elephants. Incidentally, when the Spaniards migrated to America there was not one elephant to be found, and not one single horse in America, and yet horses have been found buried and fossilised by the hundreds and thousands in America". To top

Professor Donald DeYoung (a physics professor at Grace College in northern Indiana's Winona Lake and the author of Weather and the Bible) in a recent article published on the IndyChannel web site, suggests that the world didn't always have the climates it does today. The flood of the Bible, he says, signaled the start of weather as we know it. See more at the IndyChannel (article) - see also a video link on this page.

In this article, professor De young says that "The early earth, from the time of Adam to Noah, had a layer of moisture in the sky - it can be called a vapour canopy, this was not liquid drops of water, but it was humidity, just like we have in a classroom or in the air." In the article professor DeYoung says that this water would become a source of the flood. Others sources of water for a global flood may have been subterranean. In Genesis the "fountains of the great deep" are mentioned before the "windows of heaven," indicating either relative importance or the order of events.

Was Mount Everest ever flooded. Below Professor Donald DeYoung  comments:-

"According to Genesis 7:19-20, every hill and mountain on earth were completely covered by the floodwaters.  As evidence, Mount Everest has a wide band of marine limestone near its summit.  The sedimentary rock had its origin beneath water, and is present in many mountain ranges.  Igneous and metamorphic rock masses are also interspersed within mountains.  Marine fossils such as shells and coral are common on the earth's high mountain summits.  According to Psalm 104:7-9, many high elevations were supernaturally thrust upward at the conclusion of the Flood as the ocean basins sank downward.

At Thy rebuke they [waters] fled;
At the sound of Thy thunder they hurried away.
The mountains rose; the valleys sank down
To the place which Thou didst establish for them.
Thou didst set a boundary that they may not pass over;
That they may not return to cover the earth.
New American Standard Bible

Although the material that makes up Mount Everest was indeed covered by the floodwaters, the mountain itself may not have existed until after the Flood.  As the earth’s crust was thrust upward, supernaturally or possibly due to colliding of continents, it carried underwater sediment along with it.  Modern mountain ranges likely originated at this time.  Genesis 7:19 explains that during the great Flood, all the high hills and peaks existing at that time were covered.  Today’s highest mountains, however, may be post Flood features, far higher than pre Flood mountains".

An Ice Age Caused By The Genesis Flood, by Michael Oard.r.

Darwinism And The Rise Of Degenerate Science, by Dr Paul Back - A chapter is devoted to the age of the Earth.

Sea Floor Sediments And The Age Of The Earth, by Dr. Larry Vardiman

Weather and the Bible, by Professor Donald DeYoung

After devastation ... the recovery

Flood models: the need for an integrated approach

How Could Saltwater and Freshwater Fish Survive the Flood?

Noah's Flood - Where did the water come from?

The (second) greatest catastrophe of all time

Was the Flood global?