Galton and Ploetz as a link between Darwin and Hitler, by Andrew Sibley, author of 'Restoring the Ethics of Creation' (picture below left)

Darwinists often claim that there is no link of importance between Hitler’s fascism and Darwinism, but claim instead that Hitler’s fascism was motivated by time spent in Catholic Vienna, and by the influence of Luther on German thought. However, the evidence does reveal a link from Darwin to Hitler, especially through Darwin ’s cousin Francis Galton and the German eugenicist Alfred Ploetz.

Hitler used religious language in Mein Kampf (my struggle) where Hitler claims for instance that he is acting within the will of the ‘Almighty Creator.’ [i] Although such use is different to that understood by orthodox Christianity. Hitler skillfully used Christian language to blind so many to his very un-Christian cause and together with a group called The German Christians (Deutsche Christen) forced protestant Christians into the unified, politically controlled Protestant Reich Church . However, a number of German protestant scholars were not taken in by the rhetoric and actions of Hitler. For instance Dietrich Bonhoeffer, Martin Miemoller and Karl Barth and others of the Confessing Church (Bekennende Kirche) signed the Barmen Declaration, in 1934and rejected Hitler’s fascism and the compromise of the Protestant Reich Church. It became increasingly apparent that Hitler in fact hated Christianity, claiming that he wished to abolish it:-

‘I do insist on the certainty that sooner or later—once we hold power—Christianity will be overcome and the German church, without a Pope and without the Bible, and Luther, if he could be with us, would give us his blessing.’ [ii]

One notable scientist to acknowledge Hitler’s acceptance of Darwinism was Sir Arthur Keith. In his book Evolution and Ethics he comments:- 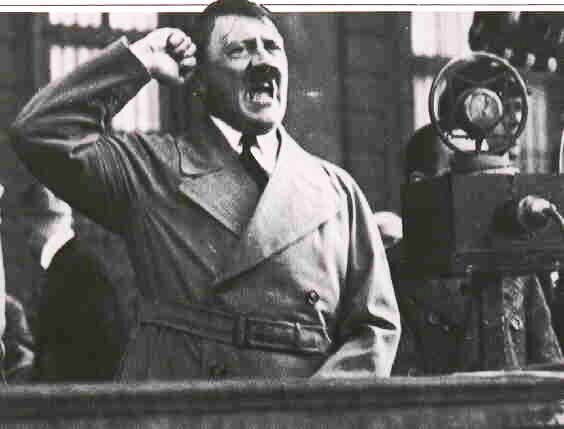 ‘The leader of Germany is an evolutionist not only in theory, but, as millions know to their cost, in the rigor of its practice. For him the national “front” of Europe is also the evolutionary “front”; he regards himself, and is regarded, as the incarnation of the will of Germany, the purpose of that will being to guide the evolutionary destiny of its people.’ [iii]

To understand Hitler it is necessary to look beyond the surface rhetoric, and note that Hitler was in fact pantheistic in his thinking having links with the occult Thule Society. For the pantheist, god and nature were one and the same. This belief can be seen in much enlightenment philosophy, for instance in Spinoza’s work, and also in the philosophy of Darwin ’s German supporter and acquaintance, the monist Ernst Haeckel. This pantheism can also be seen in Hitler’s comments where nature is said to possess creative power:-

‘No more than Nature desires the mating of weaker with stronger individuals, even less does she desire the blending of a higher with a lower race, since, if she did, her whole work of higher breeding, over perhaps hundreds of thousands of years, might be ruined with one blow…When man attempts to rebel against the iron logic of Nature, he comes into struggle with the principles to which he himself owes his existence as a man. …No, there is only one holiest human right, and this right is at the same time the holiest obligation…to see to it that the blood is preserved pure and, to create the possibility of a nobler development of these beings. …and finally to put an end to the constant and continuous original sin of racial poisoning, and to give to the Almighty Creator beings such as He Himself created.’ [iv]

In other words, for Hitler, the ‘Iron logic of Nature’ was a principle that had given rise to mankind, and therefore provided a holy obligation that must be obeyed. As such mankind could only work with the process of natural selection by the racial cleansing of society. For Hitler, nature, through the process of evolution was one and the same as ‘Almighty God,’ because he believed nature had creative power over herself.

There are likely a number of links from Darwinism to Hitler’s fascism and ideas do not exist in a vacuum of thought, but within a wide social and cultural milieu. Ideas are also often caught up in a general zeitgeist, (spirit of the times), although perhaps the most notable human link can be traced through Charles Darwin’s cousin Francis Galton. It was Galton who developed eugenics and claimed in a letter to Darwin following publication of Darwin ’s Origins book that:-

‘I have laid it down in the full enjoyment of a feeling that one rarely experiences after boyish days, of having been initiated into an entirely new province of knowledge, which, nevertheless, connects itself with other things in a thousand ways.’ [v]

Later Galton (picture left) would write that Origins turned him towards atheism, commenting that:-

‘Its effect was to demolish a multitude of dogmatic barriers by a single stroke, and arouse a spirit of rebellion against all ancient authorities whose positive and unauthenticated statements were contradicted by modern science.’ [vi]

Darwin responded in kind by praising Galton’s book Heredity Genius, commenting that he found it interesting and original and found himself being partly converted to Galton’s idea that there was a genetic difference between the intellect of different classes of people, although Darwin’s response was typically equivocal.

'You have made a convert of an opponent in one sense, for I have always maintained that, excepting fools, men did not differ much in intellect, only in zeal and hard work; and I still think this is an eminently important difference.’ [vii]

This is also the view of Peter Quinn who argued that Darwin embraced some of Galton’s ideas in the second edition of The Descent of Man published in 1874.[ix] However, Darwin’s ‘bulldog’ T.H.Huxley (picture right) was more reticent about the ethical implications of evolutionary theory than Galton. Huxley comments:- ‘There is another fallacy which appears to me to pervade the so-called “ethics of evolution.” It is the notion that because, on the whole, animals and plants have advanced in perfection of organization by means of the struggle for existence and the consequent 'survival of the fittest'; therefore men in society, men as ethical beings, must look to the same process to help them towards perfection.’ [x]

Huxley argued that there should be a discontinuity between biological and social Darwinism, although when pressed on the logical basis for this he could only reply that ‘the fact is so’ and he was ‘sorry for logic.’ [xi] It is noteworthy that vested capitalist interests influenced Darwin. Sources included work by Malthus on population growth, Adam Smith on free economics and a general Victorian attitude to laissez-faire economics. Darwin ’s theory also influenced the social Darwinist Herbert Spencer, who coined the phrase ‘survival of the fittest’ and justified the exploitation of workers. The assertion that Darwin ’s theory was a purely scientific theory is therefore not entirely plausible. Himmelfarb for instance noted that ‘the Origin [was] “the application of economics to biology”…[and] was a perfect expression of Victorian “greed-philosophy”, of the capitalist ethic and Manchester economics.’ [xii] Quinn also quotes from a biography of Darwin noting that ‘…Darwinism was invented to explain human society.’ [xiii]

Galton wanted to improve the human race believing that this was what nature determined, and it is interesting to note from the following passage how closely Galton’s comments are later reflected in Hitler’s writing, where natural selection is viewed as a religious duty that must be obeyed and followed. Galton didn’t have much respect for democracy either:-

‘It is the obvious course of intelligent men – and I venture to say it should be their religious duty – to advance in the direction whither Nature is determined they shall go, that is towards the improvement of the race….But it [Democracy] goes farther than this, for it asserts than men are of equal value as social units, equally capable of voting, and the rest. This feeling is undeniably wrong and cannot last.’ [xiv]

However, while Darwin praised Galton’s book, Brookes noted that the central thesis of Galton’s statistical eugenics in Heredity Genius, was ‘deeply flawed’ and notable for ‘its lack of objectivity.’ [xv] Galton argued that the ruling classes were biologically superior to the working classes, but Brookes suggests that the objectivity was so poor that Galton seemed to be working to an alternative non-scientific agenda.

Alfred Ploetz was one of Galton’s leading German supporters, and eugenics became well established in Germany. In 1904 Galton received a letter from Alfred Ploetz commenting that ‘We take the highest interest in your eminent and important Eugenics.’ [xvi] In 1905 Ploetz established the German Society for Race Hygiene in Berlin , and also founded a journal of eugenics in Germany entitled Archiv fǘr Rassen – und Gesellschaftesbiologie. Weikart shows that as early as 1892 Darwinism had influenced Ploetz in developing his eugenic ideas. This evidence comes through a letter that Ploetz wrote to a friend, and Weikart notes that Ploetz also wrote to Haeckel that his Journal ‘will stand on the side of Darwinism,’ recruiting Haeckel as an honorary member of his Society for Race Hygiene. [xvii]

According to Weikart, time spent in Munich was a more important part in Hitler’s thinking than the time spent in Catholic Vienna. [xviii] Ploetz was active in Munich at the same time as Hitler, and although there is no clear evidence that Hitler met Ploetz, both were close friends of Julius Lehmann who published racist and eugenic material, for instance through the German nationalistic journal Deutschlands Erneuerung. Lehmann was a leading member of Ploetz’s organisation, joining the German Society for Race Hygiene prior to 1914, and like Ploetz his interest in eugenics stemmed from the 1890s. During the 1920s Lehmann had regular contact with Hitler while publishing his racist and eugenic material. [xix] According to Brookes, Heinrich Himmler also publicly embraced the eugenics of Alfred Ploetz. [xx]

A link can be established between Darwinism and Hitler’s fascism, especially through the writings of Francis Galton, Ernst Haeckel and Alfred Ploetz. Hitler’s words in fact resonate very closely with those of Galton. In later life Darwin became increasingly influenced by Galton’s eugenic programme and Spencer’s social Darwinism, as can be seen for instance from the second edition of The Descent of Man, although Darwin was less enthusiastic and more equivocal than his cousin in expressing his views, and Darwin seemed to struggle with the ethical conflict in his mind. Darwinism was not a purely scientific concept, but was a theory of its time embedded within Victorian economic, political and social thought that lent itself well to fascism. Huxley was concerned to some extent about the ethics of evolution and argued that there should be a discontinuity between social and biological evolution, but failed to provide a logical reason why this was the case.

References for Darwin and Hitler article:-