Introduction. A Living fossil is an animal or plant that is alive today and identical (or virtually so) to that shown in  the fossil records. The coelocanth is one of the best known examples of a "living fossil" but there are many other examples and a few are shown below, although the list is by no means complete.

The prominent British evolutionist Richard Dawkins speaking of the Cambrian fauna, has made the following comment: "And we find many of them already in an advanced state of evolution, the very first time they appear. It is as though they were just planted there, without any evolutionary history. Needless to say, this appearance of sudden planting has delighted creationists". Richard Dawkins, The Blind Watchmaker (New York: W.W. Norton Co., 1987). 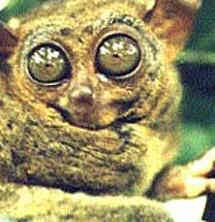 There are over 500 living fossils documented (c. 2000). However, John Mackay, of Creation research, suggests that in a sense all living organisms alive today are living fossils, in that even those organisms that are not identical to creatures in the fossil records are related (John Mackay, Personal communication, 2002).

If there were just a few examples of living fossils in one or two groups of plants or animals, one might explain this as organism that were well adapted to an environment that has not changed markedly over time.

The following is a quote form the Talk.Origins website. "In fact, in an unchanging environment, stabilizing selection would tend to keep an organism largely unchanged. Many environments around today are not greatly different from environments of millions of years ago".

However, there are living fossil examples of bacteria, many different types of plants, most insects, many fish and other sea creatures, some amphibians, reptiles and even some mammals (see below for more details). If the environment for all these organism was such that they did not need to change, where was the environment that caused all the changes?

Furthermore, if we are to believe that life began in the primordial broth as single celled organisms such as bacteria, then why are fossilised examples of bacteria such as cyanobacteria identical to living cyanobacteria today? To top

Accuracy of DNA replication "Living fossils" are living proof of the accuracy with which plants and animals canreproduce themselves and the fact that many are not changing at all. To top

Bacteria.Cyanobacteria are among the easiest microfossils to recognize. Morphologies in the group have remained much the same for billions of years, and they may leave chemical fossils behind as well, in the form of breakdown products from pigments. Small fossilized cyanobacteria have been extracted from Precambrian rock as picture left, and studied through the use of SEM and TEM (scanning and transmission electron microscopy).

The fossil liquidambar leaf (above left) is allegedly about 20 million years old on the evolutionists’ time-scale. This specimen is from ‘Miocene’ brown coal in north-western Germany. Yet the leaves are almost identical to the living variety (right), showing no evolution. The above pictures are from the article "Living fossils" - Answers in Genesis. To top

Insects Of the 12,000 fossilised insects the majority are similar to living types of insect found today, e.g. ants, cockroaches, cicadas and dragon flies (John Mackay, of Creation research). Whether bees or ants, cicadas or beetles, termites or cockroaches, the fossils of these and other insects are always practically identical with (though often larger than) their modern descendants. The same applies to the arachnids and myriapods. 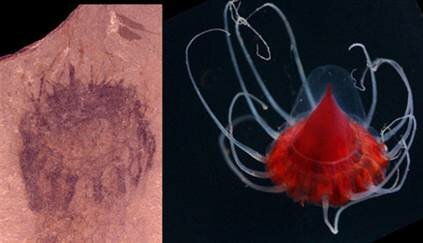 Above. The oldest known fossils of jellyfish have been found in rocks in Utah that are more than 500 million years old, a new study reports This is another example of a living fossil, with little change in appearance as far as can be seen from the fossil record to the modern equivalent.

These jellyfish left their lasting imprint because they were deposited in fine sediment, rather than coarse sand. The film that the jellyfish left behind shows a clear picture, or "fossil snapshot," of the animals. 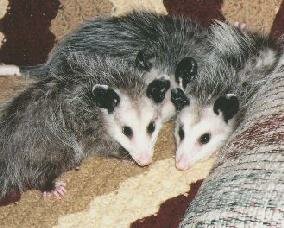 Mammals. Mammals such as bats, squirrels, shrews, opossums, tarsiers, etc., are all (and many, many others) practically identical with their fossilrepresentatives.

Nicknamed the living fossil, the opossum dates back to the days of the dinosaur. The opossum is the only living marsupial (mammal with a pouch) in North America today.

Darwinism And The Rise Of Degenerate Science, by Dr Paul Back - A chapter is devoted to the age of the Earth.

Army ants, as voracious as ever, have defied evolution for 100 million years

Living fossils of the deep

The profusion of living fossils

The videos below are in the Christian Answersweb site, with permission for linkage requested.